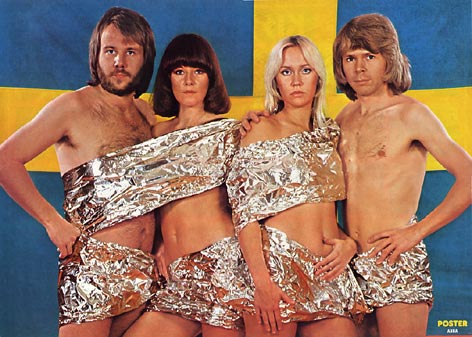 English appears to be killing Swedish.

Alright, maybe not 'killing', but English has at least given poor Swedish a mild concussion.
Because Swedes seem to be ‘losing words’. Literally.


Younger Swedes tend to use a lot of English in everyday speech. The more they use an English word the less they use the Swedish one, thus weakening their 'Swedish' memory. It's a vicious circle!
Aside from taking English words wholesale, there's also a huge amount of anglicising​​ going on in the Swedish language itself. 'Swenglish' seems to involve 'Swedifying' an English verb (eg. to hint = att hinta) or adding an extra letter to English adjectives so they fit within the Swedish grammatical system (eg. cool = coolt). This kind of 'Swenglish' changes the very fabric of Swedish.


I’m not a fan of this. But if Swedes themselves don't seem care about English taking over, then so what?


Well, in fact it turns out some Swedes do care.


According to this article written by Swedish and Dutch professors "English has caused worry amongst preservers of the Swedish language. One of the biggest worries is that English is taking over in certain areas, particularly research and higher education in biology, medicine and science..."

The article then goes on to mention Språkförsvaret” (‘Language Defence) who basically say that in Sweden many core areas — such as business, university, the media and adverts — it is English and not Swedish that is strongly represented and that this is seriously damaging Swedish: “Why is it that English spreads at the cost of Swedish?...We contend that the many different languages in the world have an intrinsic richness...it needs a grassroots movement to defend the Swedish language”.


By contrast there are those who believe that if languages die off it was ‘meant to be’. This is the view of British comedian David Mitchell, who in this video claims languages simply die out ‘naturally’ due to “natural selection”  and not due to the “actions of Man”.


This is total rubbish. Rachel Nuwer points out in her BBC Future article that "Languages usually reach the point of crisis after being displaced by a socially, politically and economically dominant one...". How are these political, social and economic conditions brought about, if not by the actions of Man?


I also disagree with Mitchell's rather ill-thought out 'it's-OK-because-languages-die-off naturally' sentiment. Anthropologist and linguist Mark Turin explains how this popular "Social Darwinism" argument is rationally unsound: we invest money in bio-diversity and protecting animals, so why not invest in human diversity by protecting languages? In his words "why should it be that the one thing that makes us singularly human shouldn’t be similarly nourished and protected?”


In the aforementioned video, Mitchell claims it is “not the end of the world” when a language dies out. He’s wrong. It is the end of the world — or at least a world — because that particular way of seeing the world is lost. Each language reflects what that culture holds dear. Its hopes and its fears. We are not USBs, we do not simply dock and transfer data. Language is so much more than that. It is not merely the communicative tool of a people. In a way, it is a people. It is an integral marker that distinguishes a people and expresses their identity.


So I hope Swedish policy makers and broadcasters listen to the general message of ‘Language Defence’ and make Swedish more visible. At the moment it feels as if some authorities and companies are treating Swedish as a second class language. And having listened to beautiful songs and read wonderful books in Swedish this particular Englishman wholeheartedly and fiercely contends that it most certainly is not.